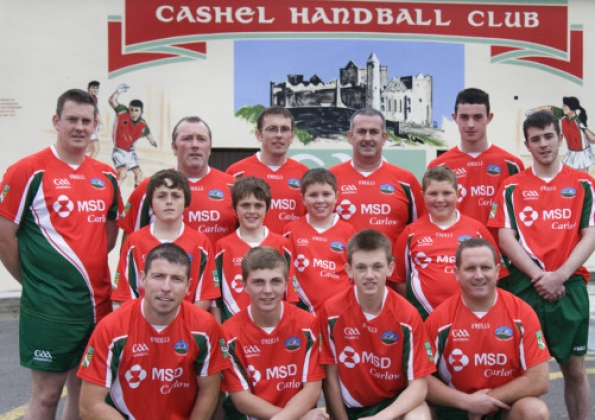 Last week six students from Cashel Community School set off for CityWest, Dublin to take part in the World Handball Championships. Colin Ryan, Daniel Hayes, Padraig O'Donoghue, Jonathan Walsh, Ross Bonnar and Conn Bonnar were amongst thousands of Handballers to take to the courts in pursuit of Gold. Despite putting in plenty of training and putting up a good fight, Padraig, Jonathan, Ross and Conn were defeated in some of the earlier rounds.

By Sunday both Daniel and Colin had progressed to the final sixteen in the U15 and U13 Singles categories respectively. Monday saw the two lads qualify for the Semi-Finals and excitement was beginning to build in the Cashel camp as reaching the finals started to seem like a real possibility. Tuesday brought more good news for Colin and Daniel as they both put on an exhibition on how handball should be played and won their semi-finals.

On Wednesday at five o'clock Colin took to the court for the Final. Having played almost every day in the lead up to the game energy levels must have been compromised for both players. Colin won the first game to a convincing score line of 15-5. The second game was a closer one but Colin prevailed to win 15-11

With Colin having won the U13 final all eyes were now on Daniel Hayes who had it all to do in the U15 Final. Again, the games from previous days had taken their toll on Daniel but he was confident that the training and preparation he had put in in the lead up would see him through. After two grueling games it was one game all and anyone's for the taking but it was Daniels determination and perseverance that saw him through to a 15-5 victory in the tie break.

Very well done to Both Colin and Daniel who have made history, becoming the first to bring World Handball Championship gold medals back to Cashel. We wish them continued success in the game in the future.