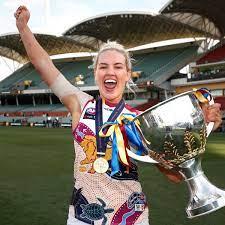 Congratulations to our former student Orla O Dwyer who starred for Brisbane Lions as they beat Adelaide Crows in the Australia Football League Women’s Grand Final. Over the course of a 6.2 (38) to 3.2 (20) win in front of 22,934 spectators at the Adelaide Oval, the 22-year-old racked up six tackles and 16 disposals to become the second Irish woman, after Crows’ Ailish Considine, to win the championship. We as a school community are so proud of her achievements both on and off the field of play.