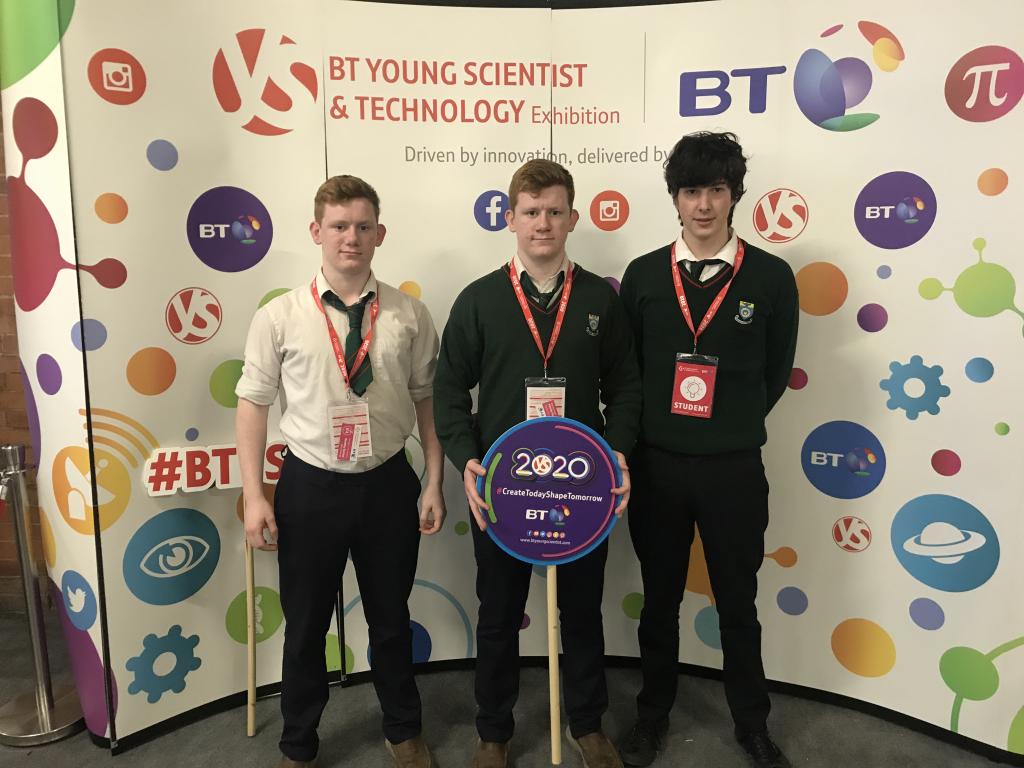 Three fifth students from Cashel Community were awarded first place in the senior Social and Behavioural Sciences category at the BT Young Scientist and Technology Exhibition. The group leader Diarmuid English, his brother Finbarr and fellow student Kiril Kariov were delighted to receive the award. The coveted prize was presented to them last Friday evening in the BT Arena by Minister for Education and Skills, Joe McHugh TD, and Managing Director of BT Ireland, Shay Walsh. Shay Walsh, Managing Director, BT Ireland said, “Congratulations to all of our participants, and particularly to all our winners. For more than five decades, the Exhibition has shown the ingenuity of Ireland’s youth, and this year’s Exhibition is no exception. The students at the BT Young Scientist & Technology Exhibition have sought creative and innovative solutions to some of the world’s most pressing issues, and that spirit and drive is to be commended. “We say ‘Create Today, Shape Tomorrow’ at the exhibition and it really is only the beginning. From the young students involved in The Primary Science Fair to secondary students at the BT Young Scientist & Technology Exhibition, it is vitally important that every student’s voyage of discovery does not end here.” The three students presented their project at last week’s exhibition in the RDS, which showcased the best 500 projects from over 3000 entries. The project titled "Don't miss a day of school" is a rigorous statistical analysis of the relationship between school attendance and attainment of Leaving Cert points. The correlation between Leaving Certificate results and whole-day absences, half days, morning and evening absences, absence for activities and whether students presented notes for absences was examined. They started their work last year when they were in Transition Year. The boys worked with mathematicians from UCC during their analysis. The findings were recently presented to an assembly of the 6th year group in the school to highlight how absences were potentially affecting points. The information and insight gained is of particular interest to students, parents and management in any similar school. The young scientists who are 5th year students at Cashel Community School impressed the judges with both their display and interactions throughout the vigorous judging process. Head Judge of the Social and Behavioural Sciences Group category, Professor Joe Barry noted that “Despite awareness of the attendance issues within our school systems a contextual study of this nature can only build students and parents awareness of the importance of remaining engaged with the school learning environment.” At the presentation the students acknowledged all the support they received from their lead teacher and mentor Mr TJ Quinn and all the teachers within the school’s science department. They were also grateful for the support from their respective families. Mr Quinn commented “We are delighted to bring home such a high level award. It was the first ever successful entry from our school and we didn't know where we would be regarding the standard of work. The lads put together a great display to build on a lot of hard work and serious analysis including learning new computer coding languages to deal with the data. There was a lot of interest shown in our project by the public at the exhibition as leaving cert points and absenteeism are topical for most people. I am delighted with the way the lads interacted with the judges and the public and their passionate explanation to everybody who asked showed that this project became a labour of love for them”. Speaking on Friday night the Principal Mr John Gallagher expressed his profound admiration for the effort and commitment shown by all those who were involved in or supported the project- Diarmuid, Finbarr and Kiril, their teachers and their parents. He said “we as a school community are delighted that the students’ commitment and diligence has been recognised and rewarded at a national level and of course we are enormously proud of the students for bringing a national title of this magnitude and prestige back to our school. Well done to all involved”.