On Saturday January 19th, a gallant Cashel Community School side overcame the disappointment of last year’s Munster Final defeat to finally capture Munster honours. In the last number of years the school has gotten to the final on three occasions and each time fallen short but a performance of sheer guts and determination, along with an abundance of skill ensured that the Munster Cup would be resting in Cashel for the next twelve months.

The game itself was extremely competitive with Coláiste Muire, Ennis bringing lots of energy and fight.  This resulted in the first twenty minutes being played at a hectic pace and not an inch being given by either side.  As the game opened up the Cashel girls managed to work some fine scores, with Lucy Fogarty, Grace Moloney, Rebecca Farrell and Leah Baskin getting onto the end of some finely worked moves.  At half time there was nothing separating the sides and it was going to take a goal to decide this ding-dong affair.

That goal came in the early stages of the second half with Leah Baskin showing great strength to hold off a number of Ennis defenders to bundle the ball over the line.  The sides exchanged points for the remainder of the half, but composed defending ensured that Cashel CS managed to keep that vital goal between the teams right to the end and scenes of great joy were witnessed at the final whistle.

Cashel CS beat Coláiste Muire, Ennis on a scoreline of 1.10 to 9 points.  All six backs, along with Evelyn Gayson Molloy in goal coped admirably with all that was thrown at them, with both wing backs, Lisa O Connor and Katelyn Downey constantly driving Cashel forward.  Centre field was a constant battle but the girls managed to get a hold of it midway through the second half which allowed for a stronger finish from the Cashel girls.

The impact of the subs that came in were crucial , Allesia Mazzola dictated the game when she came on along with Lily Fahie who was ferocious . 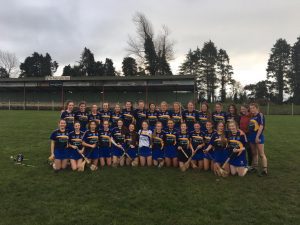