Saturday 2nd March 2019 will live long in the memory of those involved as the day when the first GAA All Ireland title in the 25 years existence of Cashel Community School was won by the Senior Camogie team.

In the unpredictable March weather, Magherafelt made a fatal flaw of choosing to play against the strong wind in the first half despite winning the toss. The girls from CCS seemed very prepared for the physicality of the northern team and struck the first blow of the day when Caoimhe Perdue, moved from her usual role at centre back to full forward, goaled her first of the day after 4 minutes.

The Magherafelt puck outs were held up in the wind and the Cashel forwards made the most of this with Karin Blair, Grace Moloney and Rebecca Farrell all tagging on points in quick succession.

Cashel gave an absolute masterclass in work rate, which has been a key feature of their performances all year. The midfield combination of Aine O’Dwyer and Aoibhe Gayson Molloy completely stopped Magherafelt from hurling, breaking every ball and tackle that came their way. Aoife Linehan took up the role of a third mid fielder and had the game of her life preventing attacks and clearing every ball she got her hands on.

The floodgates opened with goals from both wing forwards Grace Moloney and Leah Baskin propelling Cashel to a 3-4 to 0-0 lead after 17 minutes. Magherafelt struggled to get the ball beyond the Cashel half backline of Meabh Elle Ryan, Sarah Delaney and Grace O’Dwyer whose strength, skill and determination saw them dominate the game on their terms.  Magherafelt frees were visibly held up by the wind and Cashel captain Sorcha Ryan, a colossus at full back, won every ball that came her way in the air and drove out the field to clear her lines.

Caoimhe Perdue’s pace was unstoppable at full forward and despite the attempt to play a sweeper in front of her, she goaled again. Karin Blair’s fourth point of the day brought the first half to a close with Cashel well on top on a score line of 4-7 to 0-0.

As the teams returned to the field for the second half, the strong wind that had been there for the first half dropped completely. The score line didn’t reflect the physicality of the game, Magherafelt full back Clare McCartney was lucky to escape with a yellow card for a high pull on Caoimhe Perdue.

Magherafelt’s only score of the game came from a free by Anna Cassidy in the 37th minute but it was clear at this stage that the Cashel girls had too much for them.  Classy Caoimhe Perdue completed a hatrick of goals with a wonderful weaving run down the right wing and a finish into the top left hand corner of the net, followed quickly by her fourth goal of the day in the 57th minute, her final tally 4-1, deservedly earning herself the Player of the Match Award.  Lisa O’Connor made a welcome return as a substitute, having broken her wrist in the All Ireland Quarter Final and was unlucky not to get on the scoresheet. Eleanor Tobin scored a great point to seal the win for Cashel who ran out very convincing winners 6-10 to 0-1.

Jubilant scenes followed as CCS captain Sorcha Ryan received the cup and celebrated with their coaches Mr. Hynes and Ms. Sheehan, their teachers, families and friends on what will go down in history as the first All Ireland GAA title for Cashel Community School. 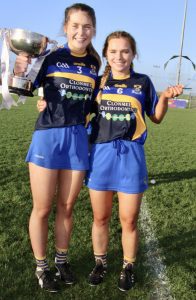