The senior footballers from Cashel Community School travelled to Thurles with the aim of retaining their Senior B football title however, their task would not be easy as they faced a well drilled Nenagh CBS team. Last Friday (December 15th) in a sun-drenched Dr. Morris Park the Cashel men, playing with the aid of a strong first half wind got off to a flying start.

A Riain Quigley free and a long range beauty from Tomás Skeffington got the Cashel men up and running and with Nenagh spurning some early chances the west Tipperary side soon asserted their dominance. Further points followed from Quigley (play) and wing back Kevin O’Connor. Their strong running game was proving difficult for Nenagh to deal with and having dropped an extra defender back scores were proving hard to come by. The north Tipperary side opened their account after 15 minutes and were only two behind (0-4 to 0-2) with half time drawing near. Nenagh had a chance to hit the front but for a fantastic save from Cashel goalkeeper Adam Skeffington. This seemed to spur the leading team on as they tagged on three further points before the half time whistle. Two points, again from the impressive Quigley and one from lively forward Charlie Costello leaving the score 7 points to 2 at half time.

Cashel again settled quicker into the second half and getting the first score through wing-forward Liam McGrath. Not for beating easy though this strong Nenagh team began their fightback from here registering 1-2 without reply to leave the minimum between the teams 8 points to 1-4. The fightback was short lived however and the brave Cashel men rallied again. Who else but the inspirational Quigley who landed one from a close in free and another from play.  Soon after Colm Moloney assured all of the starting inside forward line got on the scoresheet leaving the scores 11 points to 1-4. As well as their attacking exploits Cashel were heroic in defence with John Bourke, John Ryan and Mark Casey playing with menace as well as setting up great attacking opportunities. Nenagh did close the gap to three but to no avail who through sub Cian Bargary’s 45 clinched a deserved win and ensured the Brother Dalton cup headed back to west Tipperary. Having come with that aim in sight it was with great satisfaction that captain Ross Bonnar accepted the cup, capping off a great double in this hotly contested competition. 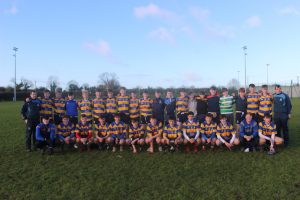