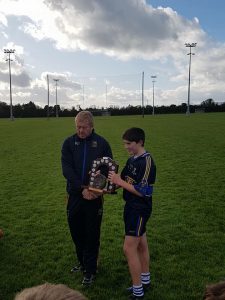 The Cashel Community School first year hurlers finished off a memorable campaign when they defeated Rockwell college in the final of the Sciath Ui Cathain. What was even more impressive was the unbeaten campaign of this year’s crop of first years.

The first game of the year was a challenge game against current Harty Cup champions, Our Lady’s Templemore. The boys performed brilliantly and won the game comfortably. It was at this stage My.Hynes and Mr. O’Dwyer were expecting the best in championship action.

To qualify for the final blitz of the Corn Ui Scaithain the boys had to overcome a qualifying blitz against Thurles cbs,Borrisoleigh and Borrisokaine . CCS won all three games comfortably with all players impressing one way or another. JP Anglim was the top scorer on the day, with impressive performances from Billy Loverdige and Ben Currivan just to name a few.

The final blitz of the year took place in Dr.Morris Park where we were drawn with Colaiste Dun Iascaigh and Roscrea. CCS defeated a spirited Colaiste outfit by ten points, helped by the dominance in the middle sector from Ben Currivan and Fabian Ryan. In the final group game, we struggled for Long periods before a superb second half by Ronan Connolly enabled us to comfortably win the game and reach the final.

The final was a tense affair, despite dominating the play. CCS enabled Rockwell to get within two points in the closing minutes thanks to some sloppy defending. Up step, JP Anglim who retrieved a ball in the half back line and carried it up the field beating all players in his tracks before driving over the decisive score.

Cashel held on to win the final and bring home the Sciath Ui Cathain for the first time since 2013. Ben Currivan raised the cup. Cashel now begin preparation for the Rice Cup qualifiers after Christmas. The goal must surely now be to push on and make an impact in the Premier Under 14 Post-Primary Competition.

Panel throughout the year: