Cashel community school qualified for this year’s Munster Post Primary Schools Senior B Hurling final, after edging past Bandon last Saturday in St Ita’s GAA pitch near Youghal. This was a thoroughly enthralling encounter, where two seriously committed and well-prepared sides gave everything they had in pursuit of victory. The beach-side pitch meant the game was played with a very strong wind throughout, with the Tipperary boys playing with it in the first half. While Cashel started well, it was not reflected on the scoreboard after 20 mins, with only 3 points to 2 lead. The Tipp school found the swirling nature of the wind difficult and clocked up seven wides, many from long range. However as half time approached Mossy Skeffington scored the first point from play in the game and a minute later scored a vital goal after a brilliant pass across to him from Ross Bonnar, leaving Cashel ahead at half time 1.5 to Bandon’s 0.2.

On the resumption Bandon immediately went after Cashel’s lead and scored the first three points of the half, leaving only three between the sides. Against the strengthening wind, the Tipperary school rallied again with Ross Bonnar netting and Colm Moloney immediately adding a free for Cashel. Bandon, who competed in the Harty Cup last year, responded with the next 6 points to level the score at 2.06 to 0.12 with ten minutes left. Cashel showed heart and desire from here to the finish, taking a one point lead twice, only for Bandon to equalise. With time up Cashel attacked again winning a close in free, with Colm Moloney holding his nerve to score his 5th free of the game. Bandon had a number of minutes of injury time to get an equaliser but the Cashel defence held strong. There were scenes of great joy for Cashel and utter devastation for Bandon when the final whistle blew. The huge Tipperary support spilled onto the pitch to salute the fantastic efforts of all involved. Cashel had huge performances all over the field with Aaron Browne in goals, John Ryan, Mark Downey, Eoghan Connolly and Ross Bonnar to the fore in a real panel effort.  Against a physically bigger and stronger Cork side, Cashel’s work rate and willingness to chase, hook, block and create turnovers helped them over the line on a score 2.08 to 0.13. They now play another fancied Cork school, Mitchelstown CBS in the Munster Final on February 17th. 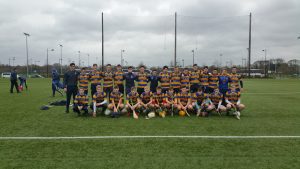